Thomas Joseph (T.J.) Buretta doesn't volunteer because it will make him a good doctor or a better person — though both are probably true. He volunteers because it's so much fun. 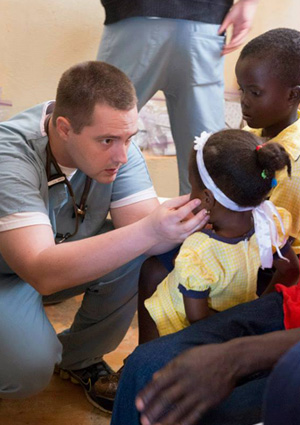 Most recently, over his 2013 spring break, he flew with a group of 3rd– and 4th–year medical students to spend 10 days delivering healthcare to Haiti.

Buretta wasn't interested in medicine (or volunteering) while studying communications at Pepperdine University. However, a senior-year internship at the student health center made him realize what he had been missing. Though it was a communications internship, he earned phlebotomy and medical assistant certificates so he could provide hands-on assistance to the office physicians.

The fall after graduating, he continued his medical training by enrolling in Cal State Fullerton's Pre-Health Professions program. This two-year program provides non-science college graduates the prerequisites to apply to medical school. Outside the classroom, Buretta helped the Student Health Professions Association (SHPA) organize charity walks and blood drives, but he also volunteered extensively throughout the region. During his years in Fullerton, he worked with LIGA: The Flying Doctors of Mercy, Flying Samaritans, Students for International Mission Service, Camp Ronald McDonald, the LA County–USC Medical Center, along Skid Row in Downtown Los Angeles, and with two local hospices.

Working in hospices not only shaped Buretta's medical philosophy, but has had a profound impact on his personal life. Typically, those admitted to hospices live for six months, but the first patient Buretta was assigned to, via the Inland Hospice Association, survived for two years. Spending so much time caring for a terminal patient gave him an insight into medicine that he continues championing among medical school classmates.

"A lot of times, a doctor's goal is to save and to cure. With hospice, it's about the quality of a patient's life. It's about alleviating pain," Buretta noted. "In med school, this is often a different viewpoint when we discuss what is best for our patients. Some view hospice as giving up. It's not. It's taking care of your patient until the end."

This point was driven home for Buretta when he helped his grandmother enter hospice before she passed away from ovarian cancer in 2013. "At the end, I knew what kind of care she needed and what kind of care she could expect," he said. "It was such a big comfort for me to help her make these decisions with confidence."

As meaningful as his time working with hospices proved to be, probably no volunteering experience affected him more than his work on Los Angeles' Skid Row. This is an area of Downtown LA that contains one of the largest stable populations of homeless people (6,000–9,000) in the United States. For someone who grew up in suburban Illinois and went to college in Malibu, few places could have felt more foreign or threatening.

"I grew up sheltered. And I'll admit, when a classmate of mine first took me there, I was scared to death. I thought I would be defending myself and her!" he recalls. "But I was completely wrong. The people we met were so kind and grateful. It ended up being an amazing experience."

Buretta was hooked. He returned nearly every weekend, helping with free clinics as well as clothes and shoe drives. Working with underserved populations has no shortage of challenges: patients — some of whom are undocumented immigrants — often don't trust doctors; many have chronic, untreated medical or mental health conditions, or drug-dependency issues; and they rarely have the income to pay for medical care. 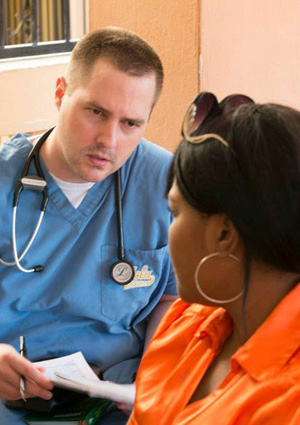 Working with underserved populations has no shortage of challenges: patients — some of whom are undocumented immigrants — often don't trust doctors; many have chronic, untreated medical or mental health conditions, or drug-dependency issues; and they rarely have the income to pay for medical care.

"People there often need to decide between medicine or food, and they pick food," Buretta noted. "But what would anyone choose in that situation?"

Despite, or perhaps because of, these challenges, it was during this time that he decided his future in medicine would involve working with underserved populations.

"If you work with a patient in Beverly Hills and teach them to take care of their blood pressure, that's great. But if you can teach people who have limited access to health care to take care of their chronic issues, you're adding years they wouldn't otherwise get to their lives," he said. "I get such a rush from that. There's nothing like it."

With this outlook, Buretta fit right in at UCLA's David Geffen School of Medicine's PRIME Program. PRIME is a five-year, dual-degree program (he is concurrently pursuing an MBA) aimed at developing medical leaders working with underserved populations.

In his first year in the program, Buretta and his cohort of 17 students had three weeks to put together a group project. During orientation, he managed to get them down to Skid Row, and they all agreed this was the population they wanted to serve. The cohort conducted a survey of the patients and created a needs assessment: they had shelter, beds and food, but lacked proper foot health care, a critical deficiency, since the average homeless person walks 10 miles a day (compared to four miles amongst the general population). Of course, their lifestyle only exacerbated the problems.

"A lot of them can't take their shoes off at night, because they might get stolen. So they are wearing their shoes 24 hours a day, walking in them, sleeping in them," Buretta said.

During their first semester, the cohort created a program called Happy Feet

. They would go to Skid Row and other medically underserved communities, where they washed feet and provided new socks, shoes and basic medical care. If a patient had a condition beyond the their ability to treat, they called in foot specialists. The program was launched in 2009, and over the following four years has been taken over and expanded by UCLA undergraduates; a second chapter has also been launched at Pepperdine.

It's amazing how this whole thing started: from me volunteering one day and scared out of my mind, to eventually collaborating on a project with 17 medical students,

Buretta said. "And now it's become this huge thing."

That alone would be a great legacy for any medical school student, but he hasn't limited his volunteering to the United States. Throughout his time at Cal State Fullerton and UCLA, Buretta has taken an estimated 20 trips to Mexico to volunteer with free medical clinics. Most recently, over his 2013 spring break, he flew with a group of 3rd– and 4th–year medical students to spend 10 days delivering healthcare to Haiti.

"I could have relaxed at home or gone to the beach in Cancun, but this was more fun. I loved it," Buretta said.

And that is the advice he has for any student looking to volunteer: do what you love. It's not worth it if you aren't passionate about what you're doing, especially since your insincerity will likely show.

"I'm on the admissions committee at UCLA. In interviews, students talk about wanting to go to medical school and being a good doctor. It's obvious when they see volunteering as just checking off a box to get into school as opposed to something they are truly passionate about," he said. "And those aren't the kind of students we want in our program."

That passion is also what Buretta attributes to his own ability to balance course work and volunteering. At Cal State Fullerton, he earned a 4.0 g.p.a. even with so much of his time spent on extracurricular activities.

"If you want to get straight A's, you can do it; it's largely a matter of time management," Buretta said. "The question is, what are you going to do with the rest of your time? I spent my weekends volunteering because I enjoy it. It's what I want to do with my life, actually."