Though earning a medical degree isn't easy for anyone, Carmen Cancino's path was especially rocky. But bumps in the road never discouraged her; they just made her a better doctor.

Never one to shy away from multi-tasking, Cancino also co-founded the Young Doctors Club while in medical school. The club supports and encourages students from medically underserved communities to pursue careers in healthcare. 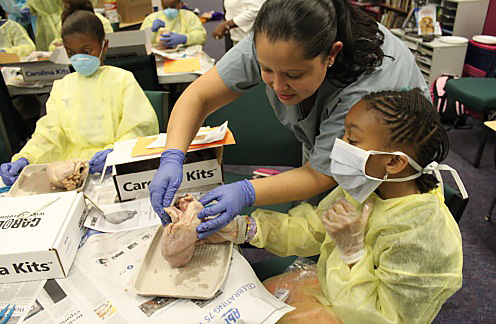 Cancino was born in an inner-city county hospital. Growing up, that's where she returned for medical care. She remembers long waits (up to 18 hours), alongside people lacking insurance or the resources for preventative care. Even when she would get to a doctor, they often couldn't spare more than a few minutes. Though Cancino didn't fully understand what she was witnessing, she knew she wanted to change it—by becoming a doctor herself.

Little did she know the difficulties she would face. Her dream nearly ended early on when, shortly after enrolling at UCLA as an undergraduate, she was placed on academic probation and eventually dismissed.

Dismayed, she turned to her professors for advice, who told her she wasn't cut out for medical school. But that negativity only spurred her on to work harder.

"Excuses were never tolerated when I was growing up. And I knew my grades didn't reflect my true ability," she said. 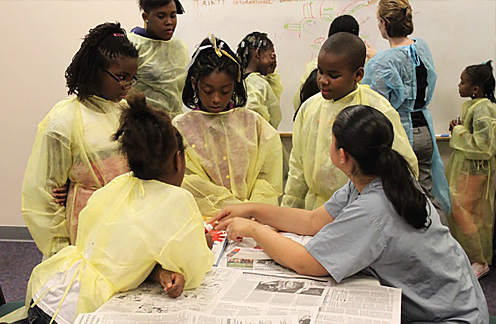 Cancino took classes at the UCLA Extension, where she learned effective study habits and earned her way back into the bachelor's program. She also switched her major from biology to sociology, a subject she credits with providing the well-rounded education a doctor often needs for treatment.

"I am a true believer in patient-centered medicine — understanding that each patient is an individual from a specific cultural, socioeconomic and health background," she said. "Understanding that can be essential to 'fixing' the patient."

Cancino said this philosophy crystallized during her time in Cal State Fullerton's Pre-Health Postbaccalaureate Program. All students in the program are encouraged to get additional medical experience by volunteering outside the classroom. One of the places Cancino worked at was a community-service clinic.

She remembers a patient there who was scheduled to visit the clinic three times a week for renal dialysis. When he arrived for only a third of his appointments, his physicians labeled him "non-compliant." It wasn't until they took the time to talk with him about issues outside of medicine that the doctors realized he had no car and lacked the money for public transportation.

"That showed me that if you don't understand all the factors impacting a patient's health it can be extremely difficult to provide the quality care they need," Cancino said.

For most students, the combination of Pre-Health's curriculum and volunteer work dominates their years in the program. For Cancino, it only supplemented what was already a joyful and chaotic time. She enrolled shortly after marrying, and was pregnant with her first child in the middle of her second semester. After giving birth, she only took off one week before returning for final exams.

"I always say, 'Mommies can do anything!'" Cancino remarked. "While I believe that, the small class sizes and supportive faculty and staff were a huge help. Faculty made a point to offer help during class and had an open-door policy for office hours. They were always willing to re-state important points to prepare us for exams. All that left me well-prepared for medical school coursework."

Not surprisingly, Cancino continued to excel after enrolling at the University of Illinois College of Medicine at Chicago, where she received a scholarship from the Aetna Foundation and an Albert Schweitzer Fellowship. In her third year, she completed a rotation in a Level I trauma center on the west side of Chicago, and decided to pursue general surgery as a specialty.

"That was one of the most exciting and fulfilling times of medical school," she said.

I enjoyed working with my hands, the fast pace and learning-by-doing in the operating room. And it is amazing to see patients arrive nearly deceased and basically come back to life after surgery."

Never one to shy away from multi-tasking, Cancino also co-founded the Young Doctors Club while in medical school. The club supports and encourages students from medically underserved communities to pursue careers in healthcare.

Though several years away from practicing medicine — they range from 2nd to 9th grade — the "young doctors" are already improving health outcomes. They recently spent five months studying the leading causes of mortality in their community and created posters and outreach material on diabetes, obesity, strokes, hypertension and lead poisoning. The students then presented their findings at a community health fair.

"The amount of information about medical pathophysiology, epidemiology and treatment methods they retained, and were able to pass on to community members affected by chronic disease, was remarkable," Cancino noted. "That health fair was one of the most meaningful events of my medical school career."

For someone who has helped bring ER patients back from the dead, that's saying something.

Cancino received her medical degree in 2013, and is entering a general surgery residency program at — no surprise — a county hospital. While she has no specific location in mind for future practice, she knows she will continue working in a medically underserved area.

"My dream was always to practice medicine so I could help people who need it most," she said. "Along the way, there were skeptics, but there were also many pushing me to fulfill this dream. I found a lot of that encouragement at CSUF. So for all those students who think they cannot make it, you can do it. Don't give up!"

"It is amazing to see patients arrive nearly deceased and basically come back to life after surgery."