Pre-Health Professions alum Justin Haghverdian had never traveled outside North America until his mentor, the orthopedic surgeon Dr. Steve Mora, invited him on a medical mission to Peru. 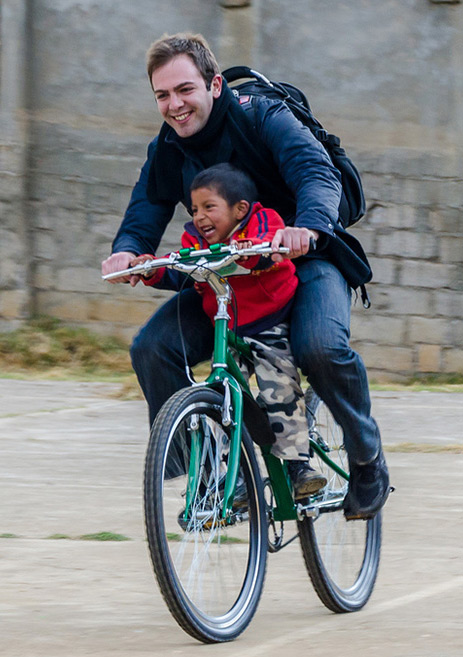 Haghverdian had good reason to trust Mora's advice. By this point, he had shadowed the doctor for over a year. That isn't typical — most mentoring relationships last two to three months — but it also isn't surprising given their similar backgrounds.

The two had been introduced through CSUF's Health Professions Advising Office, which maintains a list of local physicians who are willing to serve as mentors. When Haghverdian saw an orthopedic surgeon was available, he immediately asked Dr. Christina Goode, academic advisor and director, to help make an introduction.

While in college, his interest in medicine was initially piqued by first-hand experience with orthopedic surgery. While an undergraduate at the University of California, Irvine, he had two operations on his knee after injuring it in what he describes as an "ultra-competitive" ping-pong game.

"That's when I found out how cool health care was. At the time, I was working in IT, and here was another field with so much technology," he recalled. "I was also going through a personal transition. Up until my junior year, I was overweight and ended up losing 85 pounds. That got me interested in physiology, anatomy, self-improvement; I wanted to help people in this regard. And when I realized I could learn about technology and help people? It was awesome."

During his stay in the surgery center, Haghverdian remembers peppering his anesthesiologist with questions. Then he would go home and start looking up unfamiliar medical terms on Wikipedia.

"Next thing I know, my browser has 30 tabs open, on different drugs, mechanisms, structures I don't understand," he said. "I wanted to learn more."

Like Haghverdian, Mora was introduced to the field by personal injury. While four years old, he was living in his parents' native country of Peru when a commuter bus ran over one of his legs. In the midst of years of hospital visits, he began telling relatives he wanted to become a doctor himself. When he was seven, his family moved to Anaheim. Though they lacked insurance, Mora received free treatment — a total of seven surgeries, including a procedure to lengthen his injured leg — at Shriner's Hospital for Children in Los Angeles. As a result, he went from walking with a pronounced limp to eventually competing on his high school tennis and soccer teams. After completing two years at Fullerton College, he transferred to Cal State Fullerton, where he majored in biology, minored in biochemistry and began realizing his dream.

The experience I had with course and lab work gave me confidence that I would excel in med school — and I did,

Mora said. "I did well because I had great professors and great fellow students as an undergrad. It was a rock solid foundation." 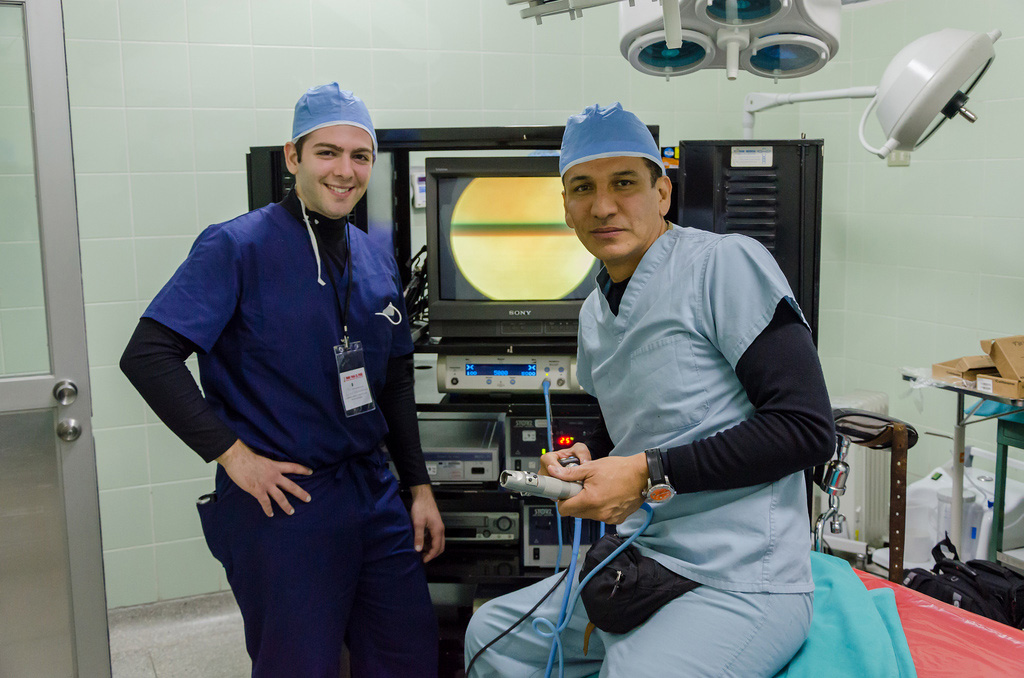 When Mora met Haghverdian, he spotted several traits he considers essential for success in orthopedic surgery. This includes being mechanically oriented; the ability to take things apart and put them back together. Mora was also impressed that Haghverdian was entering the field without a family or academic background in medicine. But most important, he saw that Haghverdian shared his own passion for helping people.

"It's not about making a million dollars. If someone's entering the field for financial reasons, that's not the right person for me to mentor," Mora said. "I think orthopedic surgery is a great field. It's worth championing. And I want sharp, good people—passionate people—to go into it."

When Haghverdian shadowed Mora he witnessed this virtue first hand. He remembers seeing him treat an uninsured woman with arthritis in both knees. She was confined to a wheelchair and in near-constant pain. Mora negotiated with the hospital so that she only had to pay a minimal anesthesiology fee. Haghverdian was there when she took her first steps out of the wheelchair.

"After she left the office I remember Dr. Mora looking at me and saying, ‘I almost cried.' To see an orthopedic surgeon with 15 years of experience almost cry, that's something," Haghverdian said.

Mora doesn't limit his medical philanthropy to the patients he sees at his Orange County office. Every year for the past three years he has volunteered with the Peruvian American Medical Society (PAMS) to visit that country's rural Huancavelica Region, where he treats indigent patients and trains local physicians.

On this year's trip, Mora also personally donated Huancavelica's first arthroscopy machine. With this machine — transported in Haghverdian's luggage — doctors can examine and treat an injured joint through an incision the size of a buttonhole. Without it, surgery can last several hours (as opposed to 20–30 minutes), and the odds of complications greatly increase — especially in a country like Peru, where advanced aseptic techniques are not universally practiced.

To help train his Peruvian colleagues on the machine, Mora ended up performing four arthroscopic surgeries himself. One of these patients had had his swollen knee examined by Mora two years ago. In 2011, the man's only option was to travel to Lima — an expensive 12-hour bus ride away — for the operation. This time, Mora did it himself.

Haghverdian's own trip got off to an inauspicious start when he ate food from a street vendor and got sick. But he persevered, working nearly every day for two weeks, from 8 a.m.–8 p.m. He shadowed Mora, assisted other physicians, and learned how to take patient histories. Peru ended up being an ideal place to perfect this skill, since their lack of labs and diagnostic machines means you learn virtually everything by communicating with your patient.

"That helped me learn how you really need to approach medicine holistically. It's not just that the knee has a certain ailment. You have to find out why they need the surgery. Do they have the money for it? Can they take the drugs?" said Haghverdian. "You're treating the patient, not the condition."

"When you go to Peru on a medical mission, you are taking care of impoverished, destitute people who make pennies a day. And they are happy and appreciative for whatever you can do. It makes you realize how fortunate you are to be able to do that."

That lesson is not lost on Mora, who finds meaning in his work through improving the lives of those he treats: "When you go to Peru on a medical mission, you are taking care of impoverished, destitute people who make pennies a day. And they are happy and appreciative for whatever you can do. It makes you realize how fortunate you are to be able to do that," he said. "You are blessed to have the resources to go over there. You feel like a better person because you have done it." 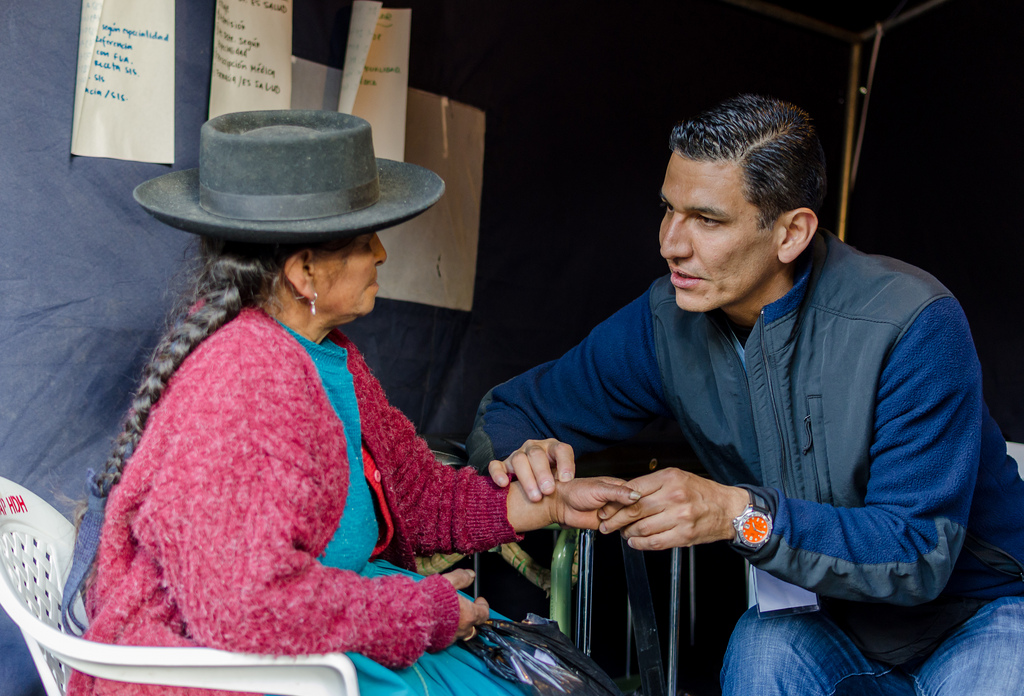 Altogether, the 49 volunteers on this mission served 1,226 patients and performed 30 surgical procedures — including the first arthroscopic surgeries in the history of Huancavelica. They also donated numerous medical supplies, including anesthetics and sutures, as well as non-medical gifts, including bicycles for a local orphanage. Haghverdian, a mountain-biking enthusiast who credits the activity for his drastic weight loss, even found time to assemble three-dozen bikes and teach the orphans how to ride them.

"The memories I made over there are going to stick with me forever," he said. "It's also been amazing to see how passionately Dr. Mora cares for and helps people. That's a big influence on how I view medicine. And Peru is a huge part of that."

Justin Haghverdian earned his Pre-Health Professions Certificate in spring 2013. With the help of a strong recommendation from his mentor, he will be attending the PRIME LC